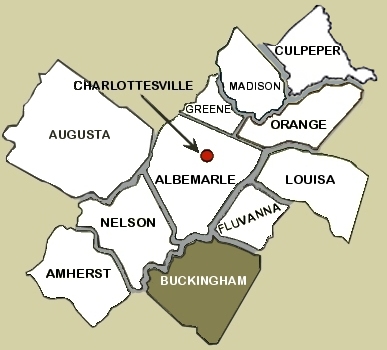 Buckingham County is considered the heart of central Virginia. The James River forms the western and northern boundaries between Nelson and Fluvanna Counties and the southern and eastern boundaries are shared with Cumberland, Prince Edward and Appomattox Counties. Buckingham County has many timber operations and is renowed for its slate. There are two towns within Buckingham County, Dillwyn and Buckingham Courthouse. The county has recently updated many of its schools as well as its Courthouse. Buckingham is one of the few places that remain where one can walk down the street and everyone speaks, regardless of whether they know you or not!

If you are thinking about relocating to Charlottesville, Virginia, we will be happy to send you our relocation packet!